Winner of the reddot design concept award for 2013, dataSTICKIES are the next generation of data portability. They are graphene-based flash drives that replace USB pen drives and hard disks.

Each of the dataSTICKIES can be simply peeled from the stack and stuck anywhere on the optical data transfer surface (ODTS), which is a panel that can be attached to the front surface of devices like computer screens, televisions, music systems, and so on. The special conductive adhesive that sticks the dataSTICKIES to the ODTS is the medium that transfers the data. This special low-tack, pressure-sensitive adhesive is capable of being reused without leaving marks like a repositionable note. When the dataSTICKIES are being read by the device, their edges light up.

Meet the designers and read more about the transfer mechanism that is the Optical Data Transfer Surface here.

Swifts’s Getting in Early with Augmented Reality

Taylor Swift is not a topic I plan to regular feature in my blog, unless her plans include more tech and gadgets like her latest product launch!

Aurasma is the world’s leading Augmented Reality Platform by HP Autonomy but it’s not new to Elizabeth Arden (EA). This is their 6th release on the platform. Here’s why:

EA uses Aurasma to add engaging augmented reality experiences to its direct mail, print advertisements, in-store point of sale, and product packaging. Combined, these methods create buzz, which is shared and amplified via the various social media platforms integrated into the campaign.

Check out the video to look into Aurasma’s vision of enabling an augmented world  – where every image, object and place has its own Aura.

We got new finger lasers. They are helping me type betta!!

Found some on Amazon

Yota’s latest E Ink smartphone takes a great idea and makes it pretty
YotaPhone is an Android smartphone with a regular touchscreen on one side and an E Ink display on the other. It’s been around for well over a year now, and in our time with previous prototypes we’ve been impressed with its premise, if not Yota Devices’ execution. At MWC this year, the Russian carrier-turned-manufacturer is showing off an all-new prototype it believes solves many of the original model’s flaws.

7bithero is an indie bitpop band that is experimenting with new ways of capturing their audience’s attention – yes, forcing the Gen X, Y and no doubt Z-ers to actually engage with their personal tech during their performances.

They do this by combining video games and concert visuals with their performances! « You should read this line again.

According to 7bit Hero, your smartphone (Android and iOS only) will be your joystick which allows you to control a character in the multi-player game that is projected behind the band. Your opponents or friends are somewhere in the crowd around you, and the band is playing the soundtrack.

Interview on the concept with 7bit Hero video is here 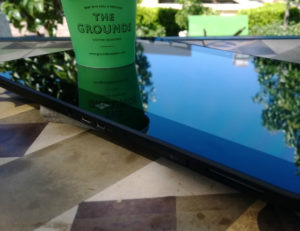 This review of the HP Omni10 Windows 8.1 tablet starts at a very popular Sydney location, a renovated warehouse full of industrial and rustic chic. I’m talking about The Grounds of Alexandria – home of Kevin Bacon the resident pig!

You can find The Grounds of Alexandria on the corner of Huntley and Bourke St or if you need a map, click here.

Located in an old pie factory from the early 1900’s, The Grounds is easily the icon of Alexandria and for many reasons too: fresh produce grown onsite, open air market-style carts with mixed wares, onsite florist, and of course the cafe. The site has a large outdoor seating space with a kids play area and a petting zoo.

The best part? The site hosts a coffee research and testing facility!

The beans used at The Grounds are selected for their unique qualities and sourced from all around the world. Each origin has its own flavour characteristics; Brazil; sweet and woody, Colombia; smoky with spicy overtones, Ethiopia; wildly sharp with fruit undertones, India; rich and syrupy, and Uganda; aniseed with dark chocolate.

The Grounds is serving me coffee from Carmo de Minas. This is a town and municipality in the state of Minas Gerais in the Southeast region of Brazil. I’ve chosen to order the Iced coffee from the menu to get me through this review.

And now for the review…

First impressions count. I, for one, must enjoy the un-boxing experience and first few minutes of handling a gadget: the surface, weight, contour, colour and overall aesthetic.Then, the operation or capability of the gadget.

I can honestly say that the un-boxing experience with the HP Omni10 tablet was simple yet sufficient.

The package contains the tablet, the power cable/charger and the OS licence certificate. And that’s it.

Picking up the tablet, I’m immediately appreciative of the matte black or ‘graphite’ soft-touch finish on the body and the high resolution screen on the front. We’ll get into specs in a bit. Stepping through the setup process for Win8.1 is a breeze and I tether to my Nokia Lumia 1520 for a few minutes to complete activation and assign my Windows account.

The brilliant 10.1” screen (1920×1200 IPS panel) makes the modern UI tiles look sensational. The clarity and the definition makes looking at just the tiles alone a joy.

Flicking my way around the menu and apps, the most noticeable feature is its performance, especially when compared to HP’s ‘corporate’ WinTab, the ElitePad 900 G1. The Omni10 uses the new quad core Intel Atom ‘Bay Trail’ CPU which smokes the ElitePad’s dual-core ‘Clover Trail’ CPU. I’m sure HP’s next release will bring the ElitePad 900 up to speed with quad-core, but for now, this puppy is impressing me…. a lot.

Looking at the storage and expansion, its a little light on for what I personally expect, but for most, 32gb eMMC storage is sufficient. I would like to think that any new tablets coming out with Windows 8.1 in 2014 would have a starting capacity of 64gb. But to keep the starting price down, at least HP has included a MicroSD slot to bump the built-in capacity up by another 64gb memory card (that’s what I’ve done with my ElitePad 900!).

A nice touch, although not unique or unexpected, is the haptic feedback on the Windows button on the front face. I don’t know why I value that as much as I do, I simply prefer it to a mechanical button – keeps the face of the tablet unspoiled.

The volume rocker is well-placed, in reach of any user’s index finger on the right side of the back of the tablet, contoured with the device’s curvature keeping it neatly tucked in.

There is a front and rear facing camera – nothing ground breaking here: 2MP front support 1080p HD video and a little indicator so that you know you’re on-the-air. The rear lens is an 8MP piece of glass, supporting HD video recording with auto-focus built in too.

Battery life should not be an issue – remember we’re using the Atom CPU here, not an i-Series (like Surface Pro). Throughout my visit and usage, the battery indicator hasn’t moved much at all, but that’s largely due to the fact that this unit does not have a 3/4G broadband module in it. Wi-Fi doesn’t seem to drain it too badly. I should see about 8-10 hours on it, depending on what i’m doing (disclaimer: I’m not guaranteeing 8-10hrs).

Lastly, the audio is important to me. If I’m listening to music or watching a show or movie, I’ll normally plug in my Beats headset – nuff said, audio is fine. But! If I’m sharing the screen to watch something, or got a group of people huddling over YouTube videos for a laugh, the in-built speakers need to hold their own. The Omni10’s stereo speakers stand up to the challenge and I am satisfied with them *except* when the tablet is resting on its bottom edge. The bottom firing speakers are easily muzzled and the audio suffers. Maybe a folding compendium can take that problem away by keeping the edge off the resting surface and giving my arm a break from holding it up at the right viewing angle!

If I had to summarise the pro’s and con’s, the list of con’s would only be a few:

Pros? Besides what I’ve stated throughout this post, lets start of with the Australian RRP. Starting at around $399 you are already in front. Everything else is a bonus ;P

So, all in all, for the average and enthusiast consumer, I would have no problem recommending the Omni10 Windows tablet from HP.

I’ll wrap this post up with a few ratings out of 10: